Forget the Metaverse: Get Ready for the Future-Verse

While the metaverse doesn’t yet match the hype behind the headlines for the average person, some industries have been merging the physical and digital worlds to keep critical industries running no matter the circumstance—and your office may be next.

Bund joined Headwall(Opens in a new window) after a stint with Finland’s extended reality (XR) headset manufacturer Varjo Technologies Oy(Opens in a new window), where he forged US-based deals with automotive and aerospace manufacturers, as well as the military for aviator training programs. This proved the business case for XR, but the pandemic-era migration to a work-from-home status really moved it forward, he says.

“Headwall was originally conceived as a pandemic mitigation tool,” Bund says. “Our inventor, Adam Weiner, had been building military command centers for years, including for naval undersea surveillance, and the US Army base in Korea at Camp Humphreys. He felt that our AR/VR technology could be reconfigured to give people access to all the pixel space and situational awareness of a watch floor while maintaining social distance or quarantine. It was a natural fit and the scope of Headwall has grown significantly since.”

Command center video walls are used in many industries today, including security firms, emergency services, and financial trading floors—some of the earliest adopters of virtualization. 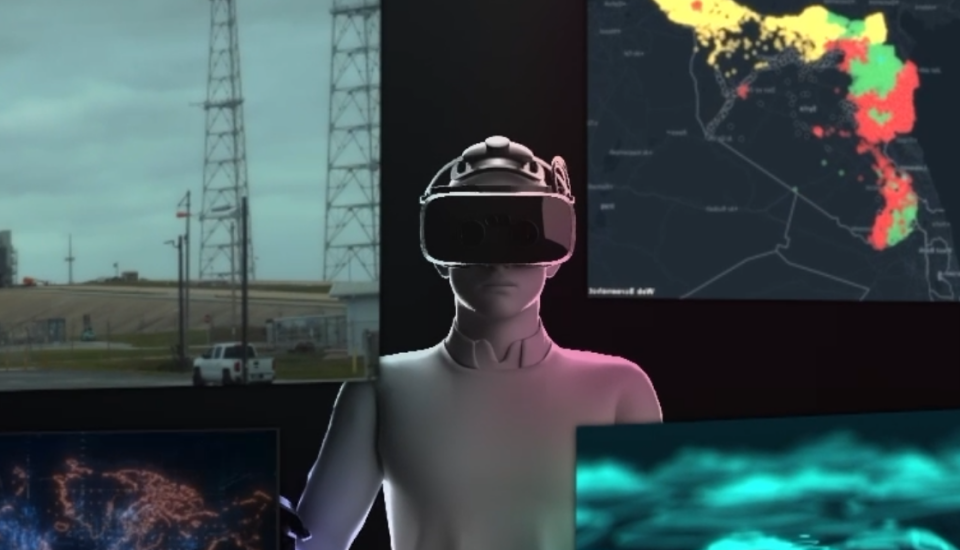 “One of our clients is a big financial holding company,” Bund says. “As soon as COVID lockdowns hit, their traders went home. But they still needed access to all trading desk tools, and large amounts of data in real-time. It would have been impossible to purchase, deliver, and set up large equipment and multiple monitors in each trader’s home, so we rapidly mirrored each trader’s desk configurations within an AR/VR environment.”

To enable the traders to review and manipulate data at home, Headwall utilized SSL encrypted IP streaming video, and control data, over a Wide Area Network (WAN). Video sources were routed to virtual displays, in effect creating a digital twin of the financial giant’s internal systems.

“Each morning, traders boot up Headwall on their Windows computers, with an enterprise Nvidia graphics card, then put on their connected HMDs,” explains Bund. “Instantly they can see live financial information, change dashboard configurations and perform all their daily tasks from within the headset. They do this using an Ultraleap hand tracking sensor(Opens in a new window) to toggle and pinch (analogous to the click of a mouse), to activate, shut off, pan, and scale, all video-based and 3D information. Crestron hardware(Opens in a new window) enables the keyboard and mouse routing and control.”

In terms of which HMD its clients use in these real-life scenarios, Headwall recommends Varjo, but Bund is also bullish on other military-grade equipment and even Meta-made devices.

“HTC Vive Pro Secure(Opens in a new window) is great, and has also taken strong strides to support the military and classified communities. It’s the only headset with a broad Authority To Operate in classified spaces,” he says. “We also like HP Reverb G2 for a quick, easy-to-deploy price fighter with surprisingly high visual acuity, and the Quest Pro, which we just tried, is really strong.” Within future-verse workplaces, when wearables are part of the uniform, the human worker can become a node on the network, showing up inside the system as another variable with multiple data points. As Bund explains, this is particularly important within extreme environments.

“During an emergency, fire chiefs and incident commanders need to comprehend large amounts of data. These might include multiple surveillance cameras, drone POVs overhead, incoming weather [and] satellite feeds, and also footage captured by firefighter helmet and body cameras on the scene,” Bund says.

For one of its clients, Headwall built real-time 3D maps, viewable via an HMD, with a biometric data overlay from each firefighter that captured and shared oxygen saturation, body temp, and heart rate data. “This enabled those in charge of the emergency situation to know not only where every firefighter was, but whether they were in danger, and needed support,” Bund points out.

The future-verse is going to require a few good…game developers?

“At Headwall we are starting to solve the problem of ingesting massive amounts of mapping and building data to render via an HMD. There are tons of issues here, all requiring new and in-demand skills,” Bund says. “As a result, Headwall has been focused on hiring people with strong technical gaming development expertise who also have a very strong eye for user design.”

Imagination and creativity will also be required. If most people are engaged in hybrid work, or staying remote, surely these new future-verse work environments won’t feature the dreaded cubicle layouts of the past.

“Is a typical Silicon Valley conference room the best possible space and way for people to collaborate? I don’t think so,” Bund says. “This is why I want to hire people who are completely focused on designing new spaces and tools that take advantage of the limitlessness of the virtual world and the technology that’s now emerging.”

Source: Forget the Metaverse: Get Ready for the Future-Verse | PCMag

Is Microsoft Shutting Down Its Virtual Reality Platform AltspaceVR? Here’s The Truth

Virtual emergencies: How one university is using VR to train its medical students in cardiac arrests